The State of Development, April 2016

First of all, those of you playing Noxico builds from Bitbucket may notice that talking to townspeople may or may not crash your game. The error may be a little confusingly worded but it boils down to missing conversational data. This will be fixed naturally as/if/when someone writes better conversational data to replace the stupid and/or stand-in data that’s there now.

Others who played may have had a crash regarding the bodyplan data where the game couldn’t find the “felinoid” data. This is because I was overhauling the plans a little, replacing the felinoids with the species that they directly inspired; the felin. The crash was simply because not all references were adjusted yet. No, anonymous reporter, it was not a typo.

Second, I’m heavily considering to remove the introduction dream from the game. It seems a silly way to teach the player how to control the game, let alone in one or two big ol’ walls of text. So instead I’m planning to replace that with a tutorial mode, which would be enabled from the character creator. Its default state would be taken from the settings file, and basically it’d let the game teach various things as they become relevant. This is why the latest commit adds image support to MessageBox – so our lovely mascot Chelsie can “host” the tutorial and appear as a sort of part of the interface, at the player’s side of the fourth wall. I’d like your opinion on this idea.

Third, I really need to nail down the setting here. Fantasy? Sci-fi? What even is this?! Weapons, clothing and such are all over the place.

Well, that’s about it for now. See ya next year 😀 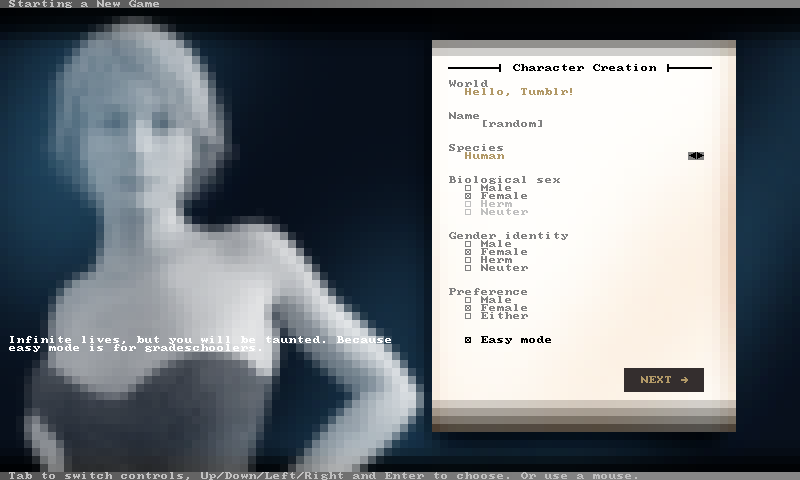 Oh dear, is that a new character creation backdrop? Yes it is, and it’s dynamic, showing a representative image of the chosen species and sex combination. If a given combination has no matching image file, it’ll try to use just the species. If that isn’t possible, it uses a generic fallback.